The Chicago Blackhawks have two games coming up this week, and their starting goalie Corey Crawford really needs a rest. They play the awful Toronto Maple Leafs and the good, but not great Pittsburgh Penguins. Against which opponent should the Hawks start their backup goalie?

The San Antonio Spurs have three games this week, and their seasoned vets Tim Duncan, Manu Ginobili and Tony Parker all need rest. The Spurs will be playing the awful Brooklyn Nets, the mediocre Detroit Pistons and the incredible Toronto Raptors. Should the Spurs rest all three against the struggling 76ers? Should they piss off the NBA and ruin a potentially great matchup by scratching all three of them against the elite Toronto Raptors? Should they all sit on different days?

When you answer these questions, ask yourself why your answer is correct.

When I asked a group of my smart and passionate sporting fanatic friends, the answers were all the same. Of course you rest your good players against awful teams – duh, everyone knows that!

The reason why most people respond this way is because even though everyone knows that sports are probabilistic, they view outcomes as being binary. When a team plays the struggling Toronto Maple Leafs or Philadelphia 76ers, they might have an 80% chance of winning the game. Many people in their head view the game as a guaranteed victory, without internalizing that this actually means that for every 10 games they play against them, they will lose two.

If I ask someone what the odds are that the Miami Heat will beat the Philadelphia 76ers on March 4th, 2016, they might tell me something like 90%. Or if I tell someone Vegas puts the odds at 75%, they will nod their heads and say they understand. But despite this, I’ve found that many people treats odds as something like this:

For both hockey and basketball, there is a linear relationship between team quality and winning ((There is actually just a ‘near’ linear correlation, but for the sake of forecasting games, the difference is immaterial. There theoretically should be a difference in player impact when teams are at a larger discrepancy in quality, but because teams in the NHL and NBA are all in a limited range of skill, this does not manifest itself in a meaningful way.)).  This can be displayed in the graphs produced below ((The top graph was made by Evan Zamir and it shows the relationship between point differential and wins in the NBA. The Second graph was made by hockeyanalytics.com and shows the relationship between goal differential and points in the NHL)) 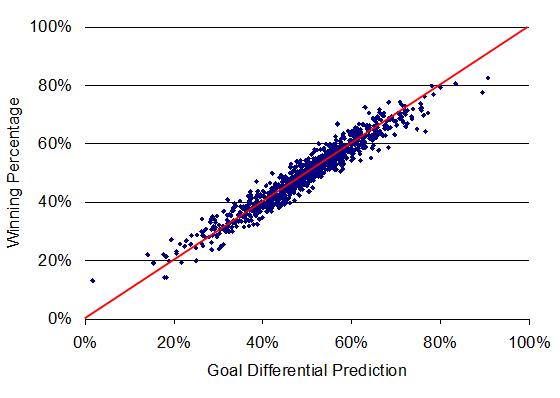 Having a linear relationship between team quality and wins means that any change in team quality will always have the same impact on wins and losses, no matter how good or bad the team initially is.

By extension, this also means that the impact of a sitting player on his team’s likelihood of winning a game will remain the same, regardless of how good or bad the opponent is.

Think of it as an an imaginary two game series: If Tim Duncan is scratched against Toronto, the Spurs have a 45% chance of winning that game, and a 90% chance of beating Philadelphia in the second game for a combined expected value of 1.35 wins.

If Tim Duncan is scratched against Philadelphia, the Spurs have a 82% chance of winning that game, and a 53% chance of beating Toronto in the second game for a combined expected value of 1.35 wins.

These are the exact same probabilities. That means that regardless of if Tim Duncan sits against the Raptors or Philadelphia, San Antonio will have the exact same chances of winning the two game series.

Similarly, if the Chicago Blackhawks have the option to sit Corey Crawford against a great team, a mediocre team, or a bad team, they will reduce their odds of winning by the exact same amount regardless of what team they pick.

The lesson from this is that once you begin to appreciate what it means to think in probabilistic terms, you realize that there is no ideal opponent for resting players – great, good or bad team, it will always have the same impact.

The implication of this is that when a coach is deciding on when to rest a player, they should completely ignore the quality of their opponent and instead focus on giving the resting player the biggest benefit. There are three exceptions to this: if a team is playing a division rival or the opponent is competing for the same playoff spot, then obviously the numbers change, as benefitting the other team harms your team. Secondly, if there are specific matchup issues such as resting a team’s only centre when the opponent has a dominant centre. Lastly, basketball teams might want to avoid resting multiple stars on the same night. While the same logic applies, having two players out might lead to the team playing in an unfamiliar setting, causing worse results.

The next time you see your favourite team rest a starter against a bad opponent, ask yourself – is this coincidentally the game where the player benefits the most from resting? or does the coach simply not understand that there is no optimal opponent to rest players?

((If you are interested in sports forecasting, I encourage you to check out the APBRmetrics board annual NBA season projection competition.  I currently have the 5th most accurate projections out of all publicly released forecasts in the world, substantially beating places such as Las Vegas betting lines, media companies like ESPN and Sports Illustrated, and most importantly, random fans on the internet.))

((If you are interested in probabilistic thinking and forecasting in general, I highly encourage you to read the book Superforecasting: The Art and Science of Prediction by Phillip Tetlock and Dan Gardner.))